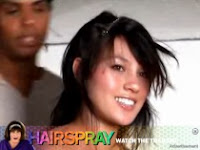 So, YouTube has started experimenting with those nasty little flash ads in the corner of some of their most popular video....and guys like Matt Harding, who has one of said popular videos, is, According to CNet none too happy with the idea "As a viewer, I don't like this at all," said Harding, whose video has been viewed more than 7 million times since it was posted a year ago. "As someone who makes videos, I would object to allowing them to put an ad on the screen. Put it on the margins, above the player but not on the screen itself."

Indeed. And, 10-seconds or not, these little ads are bloody well annoying! We already see ads like this on "commercial" TV stations--the most egregious ones on Turner stations TBS and TNT, where the ads take up far more than a small 20% corner of the screen (which is the amount of video real estate YouTube is saying its 10-seconders will take up)(BTW, the ads do start w/cable tv--more on this below...)

Thing is, so far, YouTube's expressed no intention to share any profits from these ads with any of the people who are producing the videos where the ads are placed. So, essentially, YouTube will be making money off of someone else's work. Or, depending on where they place the ads, they might even be making money off of pirated works. (nothing new to anyone looking to generate income off their own "user-generated content.")

It's not just viewers and video producers who've been squabbling over these ads--it's other video upload networks that claim they came up with this first (including VideoEgg's Troy Young in Wired.com) But wait guys! if my memory serves me, we've been seeing these kinds of ads on video for awhile now--they're ubiquitous on the TNT and TBS content, and have been way before YouTube or even online video came about.

And, indeed, Om Malik recalls old-fashioned broadcast TV....using these types of ads...and so do I!

Now, the technology for putting these sorts of ads within online content may be different (as Om notes), but the idea isn't any different from the annoying ads at the bottom of most TBS/TNT shows (I believe other networks like Bravo, USA, etc. are also now using those types of ads) This ad idea, however, came about as a way to halt piracy--unfortunately, it came about before the Internet, so finding a link to a news story about it is impossible. But, let me explain what I recall: Turner decided to put in these ads as ways to halt piracy of its first-run movies and of its shows. It also stopped the 5 second "dark" break between shows and commercials. Both the ads and the breaks were meant to try to halt piracy--as video pirates, using old VHS technology, were taking shows, skillfully editing out commercials (the 5-second jumps gave enough wiggle-room so the edits wouldn't affect content) and selling/broadcasting them as first run (usually in bars and such) This was also a problem with sports programing on TNT, so it also helped the MLBA make good on their prohibition on the re-broadcasting of games.

So, oddly, what was to broadcast TV a means of trying to stop piracy, may help a new media concern to possibly make money from "pirated" video. But if we take pirated videos out of the equation, what becomes disturbing is that YouTube currently has no plans to share its ad income with the producers of videos, then it's doing what many companies want to do with user-generated content: make money from it for themselves.

This was different than the goal of broadcast--which was to prevent piracy and keep money in the pockets of those who produced the product.

The copyright fights that are hinted at by companies like VideoEgg might prove to be very interesting...

More: Lost Remote notes that the ads only appear when clips are run on YouTube. The photo above is courtesy of LR. Thanks!

I agree, they are annoying as hell. This is going to be a complete failure for YouTube -> http://www.russellheimlich.com/blog/why-youtube-video-ads-will-ultimately-fail/

Well, I don't know if they'll fail, but there certainly is some irony in the origin of these ads, who's using them now, and the possible copyright fight.