Just found out I was tagged by tech/business journalist and travel blogger WriterJax on a really fun meme on four things....

Four jobs I’ve had in my life:
Dietary Aide (the kid who serves you food in the hospital)
Secretary for a general contractor
Assistant to the Treasurer of a non profit
Professional Blogger (yes, they paid me for doing this...not alot, but they paid me)

(Rather boring jobs, eh? yes, my life was always more fun than my work...that happens for some of us women though....)


Four Places I'd rather be right now

Down the Shore (it's not "the beach," if you know what I mean)

New York City
Austin, TX (because it's Saturday, and they got lots of music there) 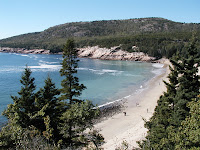 Bar Harbor, ME (where I don't ever think about the Internet)

And now I have to tag Four people (she tagged mutual friend Morriss, so he's out...) So I'll tag...

Celeste at Average Jane (got to add you to the blogroll!)
Mike at Concrete (just because)
Jason at Webomatica (because we share a love of really weird, bad cinema)
and Terry at I See Invisible People because out of all the bloggers, I've know her the longest :-)

Oh, and I know I was tagged lo these many months ago on two memes on my other blog, which is now offline, but now that I have one "home" out here, I'll just transfer those memes to this blog.

I suppose I should have told you sooner that I carried on your meme.

I would have tagged you too, but WriterJax tagged us both....