Labor Day weekend--the traditional End of Summer--is upon us. And for your consideration: hyperlocal in Australia, more on private space as public space, the possible end of MuniWiFi and more on the ethical connundrums at the NYTimes and CBS's odious Kid Nation and an independent filmmaker has probably lost the copyright on his work to Viacom: 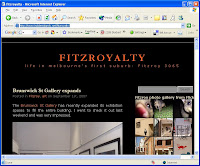 Hyperlocal highlights some of the hyperlocal/placeblog/citizen journalism sites in Melborne (from the Fitzroyalty blog.) Blogger Brian Wilson says: We may usually think that virtual social networks exist to bring together people from opposite ends of the country or other sides of the world, but they are as effective in connecting people who may live only a street away but who may never otherwise meet. how true!

Very Bad News for muni wifi:
S.F. citywide Wi-Fi plan fizzles as provider backs off a serious blow to the MuniWiFi movement as Earthlink reveals its plans to slash 900 jobs and close offices in SF, Orlando, Knoxville (TN) and Harrisburg (PA). Also see GigaOm for important follow-up on this.

Dr. Magic -- or, How I Learned to Stop Worrying and Love Starbucks From Mike Ho, post from '06 that kind of predicts we'd be having that conversation about the relavence/importance of private spaces to troubled neighborhoods. From the comments on this post

Fixing Old News: Business Opp as well as Obligation? Amy Gahran follows the comments trail on the issue of how to "fix" old news stories that keep popping up on Google search--a particularly sticky problem for the NYTimes (pardon the pun).

'Kid Nation' Plays in the Adult Nation from Mediapost's Wayne Friedman a great post on some of the (many) problems with CBS'Kid Nation If you haven't seen the commercials, Kid Nation is something like a cross between Survivor and Lord of the Flies. I'm sorry, but this was an ethically specious concept from the very beginning, and all the crap I'm hearing from CBS about it (oh, it's just like summer camp!) has nauseated me. Luckily, I'm not the only one who's nauseated. Freidman raises the questions of whether or not the children are actors or game show contestants:"It all goes to the issue about whether those on reality shows are really "cast members." Right now, reality show producers already openly use the word "casting" when talking about their programs. So why not take the next step - and pay "cast members"? Freidman also looks at advertiser's reactions to this--who aren't reconsidering their upfront for the show, even with question of whether or not the show will be pulled before it airs.

There's just something wrong when we sign up kids for a "summer camp" experiment, promise the winner $20,000, and then film it for the spectacle of broadcast TV. How this thing got this far only shows how low television is now willing to go. If it airs, I'll be waiting for the "post-traumatic stress disorder" lawsuits in 15 years.

And then there's independent filmmaker Chris Knight..Viacom hits me with copyright infringement for posting on YouTube a video that Viacom made by infringing on my own copyright! Yep, this is what can happen with all those hinky Terms of Service agreements that are floating around for "user generated content." I hope Chris can sue the pants off Viacom, VH1's WebJunk 2.0 and we all learn to stop freely giving big coporations our Independent-Produced Content. Follow the comments on Chris' blog for an excellet discussion of this problem and the fact that Chris *may not* have any legal recourse due to the Terms of Service.