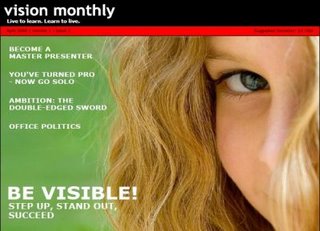 As a compulsive blog commenter (yes, I really need something like Shadows or Squidoo), I cross paths with lots of different, interesting people in my travels...Ethan Johnson, the editor of the newly launched e-zine
Vision Monthly is one of those people...

Ethan and I have bumped into each other on blogs belonging to Terry Heaton and Shelley Powers (and probably on the blogs of a few others too--I think he's got a bit of the compulsive commenter in himself, too. When he asked me if I might want to contribute, I thought "sure!"and I went to check it out...

so here's the deal: Vision Monthly is ad-free, with a $2 per download suggested donation (payable via PayPal)(thanks Ethan) That's not a bad deal, really--for a magazine that's not giving readers the same old "why did Nick Leave Jessica" crap...

Seriously. I don't buy a lot of mainstream mags because I'm not celebrity-obsessed. And there's just so many 'beauty tips' one can read before she's realized she's seeing the same ones from when she was a kid...

I downloaded and took a copy with me on my SXSW journey.

I found I was reading stories written by people I might actually like in real life...people with *lives* rather than just episodes of tragedy and triumph (yeah, I get tired of those, too.)

So I decided to take Ethan up on his suggestion that I write an essay for the April '06 issue...pony up the $2 donation, download and enjoy!

Thanks for the plug! And this will be an interesting experiment to observe: The $2 is a suggested donation, not a hard and fast cover price. One of the other authors advised the audience not to feel "obligated" to donate. So between the 2 posts half of the people who check out the magazine will donate, at least that's my hypothesis.

Seriously, indie media fans, your support guarantees that this magazine can continue and improve. If you believe in 100% ad-free, community supported media, check out Vision Monthly and better yet, contribute material to the next issue! See the site for more details.

my feelings are that your pub is definitely worth the donation...esp. since it's ad-free. some mainstream mags (like Vogue) have so many ads that it ends up feeling like we're paying for a book of fancy ads and no text. new publications that look good (like yours) and aren't ad-heavy are a reader's blessing