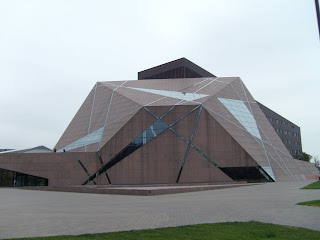 Last week I attended the latest Journalism that Matters event, which was held at the utterly fascinating McNamara Alumni Center at the University of Minnesota (which was identified by: "oh, the one that looks like a Klingon space ship.")

Klingon space ship or not, the event was quite different than other conferences, or even unconferences that I've attended. Some unconferences tend to be a bit loose, while some conferences end up being way too stiff. In either instance, you, the attendee, walks away with *something*--sometimes just not quite enough.

And, what almost always happens is that any energy or momentum to "change things" that was created in the gathering ends up dissipating, lost in a sea of other obligations, missed communications, and complicated, often ill-fitting, community tools.

So, two challenges to emerge from the conference are how to keep track of all the information generated by individual sessions, as well as how to keep the community momentum going. How can all the "good stuff" be maintained so that not just this group of attendees, but other attendees from past JTM meetups, could benefit from it/

There were, however, a number of other challenges and progress reports that emerged from this conference. A new study on "citizen generated media" was presented by Margaret Duffy, acting dean of research and grad studies at the Missouri School of Journalism. Duffy's background is in mass comm and organizational behavior, and she's worked in advertising, marketing and p.r, so the way in which her research has been conducted differs from other studies. Unfortunately, there are no PowerPoint slides on this presentation--but during her presentation, I thought that, finally, someone in academia was asking the right questions about the effect of citizen journalism.

It also came to me that the only way that the journalism establishment will begin to understand what people are doing by creating community sites, placeblogging and even just regular old blogging, is through these studies. It doesn't seem to be enough to observe and speak with people on one's own. Everything has to be codified in an official academic study. But, as I noted, some academics are now starting to ask the right questions....

On day two, the J-Lab's Jan Schaffer gave an update on the state of citizen journalism--she was gracious enough to provide the slides from that presentation, which you can download here
These are to be used only for educational purposes (or private view), with credit given to J-Lab, Jan and American University.

Blasting Myths and Dealing with Burnout

Most of the folks attending this conference run a variety of community-based sites, including independent hyperlocal blogs, mainstream media community-oriented endeavors, and some independent community-based news outlets. It wasn't your typical conference-going crowd of folks who work in big media or big academia. And while some of the sites are probably not known outside their local areas, most have been around for several years and have strong followings (such as Orange Politics and West Seattle Blog)

When you talk with people who've been doing the community thing for a long time, you find out a lot of the realities of what they do. Two myths circulating nowadays are that (1) no money can be made from hyperlocal community sites, and (2)even if you start it, nobody will find you.

Both are inaccurate, yet are often parroted in msm circles--probably as a way to try to undermine independent, community blogging efforts (just a thought...)

The fact is that people do indeed make money from their sites. The amount depends on the site, but there is *some* money in it. Sometimes the folks who run the sites make money from other related businesses like web design or consulting. Sometimes it's from hyperlocal ads. Bottom line: how much money someone makes from a hyperlocal site will depend on the people and the locale. There is no one unifying hyperlocal business model that will suit all hyperlocal sites. Every region is different economincally--and every place has its quirks. :-)

As for the "nobody will find you" thing....well, that's where bloggers now have Google on their sides. A few years ago, Google wasn't all that friendly to bloggers nor hyperlocal search. But much has changed, and now if search is done for a local region, one just might get the hyperlocal community blog before one finds the link to the hyperlocal newspaper's site.

Ah, the mysteries of Google!

Attending the session on burn-out was important for me. As regular readers will know, I've been feeling kind of burnt-out from blogging for awhile. A bunch of you offered really great suggestions, some of which I'm still mulling over. But listening to how other folks got burn-out and how they handle burn-out was important--and revealed three main reasons for burnout:

The best way to handle burnout--well, the strategies that will be effective will depend on who's suffering the burn-out. The overworked just might need a change in attitude, or to hire an additional writer, or to take a vacation. Losing motivation might be handled by starting another different or unrelated project after a break. Lack of feedback from community is tougher to address, because there is no one way to get people to participate. Making oneself visible is one way--and that can be done via Twitter (as Griff Wigley of Locally Grown Northfield.org pointed out) or just from showing up places and talking with people and letting them know who you are and what you do.

Two other little-big sessions were on legal issues and blogger insurance. David Ardia, Director of Berkman's Citizen Media Law project was there to talk legal, as was Bob Cox of Media Bloggers who got some of us to talk with a rep from an insurance company he's been working with to put together some form of liability insurance for bloggers (and other new media types, I think.)

After the Ball: Continuing Community

So, at the end, we had the usual "What's Next?" sessions. I've been to so many of these at conferences, and we all leave with that "Kumbaya" feeling--but how many of the "action steps" we discuss at conferences get appropriate follow-up? Sometimes there's just not enough to sustain the momentum. But there was a good critical mass of folks who were interested in sustaining the momentum that we pulled together a group and have actually had a post-conference call (as well as formed a google group (thanks Josh)and are taking some other important "next steps" to keep things going.

Overall, this was an unusual gathering. It wasn't glamorous, and there wasn't a plethora of talking heads giving us the Gospel of Citizen Journalism. This was people talking across professions and disciplines in order to try to make some sense of what's happening within this big old hive of the Internet. For that alone, this was a solid, good gathering...

What will make it a great gathering will be what we can sustain beyond its confines...

We were lucky in that the mayor's office found that there are over 300 businesses in the three zip codes that comprise our neighborhood. Only a very small portion of those are national chains. This left a huge number of small business people who've been looking for greater visibility in their own backyards. Also the rising price of gas has lead people to "shop locally" for an entirely different set of reasons than the shop-local advocates originally put forth.

Having said that - we didn't offer ads until we'd been up and running for almost 22 months. We sorta kinda fell into having a business. You have to just get on your horse and blog for awhile just to see if you can do it. Then you can see where it's going. Believe me - if a year ago you'd told me we'd be doing this full time FOR A LIVING I would have thought you were nuts.

Hi Patrick! I was talking with someone yesterday that mentioned that hyperlocal advertising does indeed work best when there are a number of small local-based businesses in a region, there's a better chance for a hyperlocal community-oriented blog to make it.

You're also right about blogging. Over the years I've been doing it, I've seen lots of people come out the gate with guns blazing, only to lose momentum within 6 months. It's not as easy as people think (even for people who are just emoting all the time.)

But back to the idea of hyperlocal and advertising--I think, too, that the region has to be receptive to and have good knowledge of online. Where I live, I often hear from small businesses owners the belief that their customers aren't online. Which isn't true at all--esp. the customers under 40, who are, more and more, going online. There's also a bit of mythology that if you build it, nobody will come because they can't find it. That's not true either. Name your blog correctly, do your headlines right, and you've got readership.

thanks again for stopping by and you guys got a great blog! :-)