BlogOn: the Fine Art of the Conversational Pitch 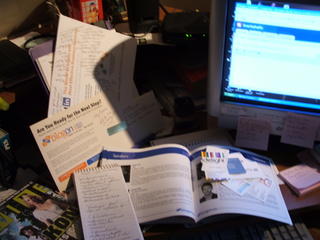 It's been three days since I got back from the
BlogOnSocial Media Summit and I'm still going thru all the stuff I collected--the business cards, the experiences--the notes I took, and the other blog entries about it.

Where do I start? what do I say first? The Copacabana is beautiful, I can say that. Its shades of burgundy and pinkish purples accented with black, silver and white, makes it quite pretty. There were pink orchids sandwiched in plexiglass behind the bar, and candelabras on the bar (which Mary Hodder photographed because, well, who'd of thought we'd see candelabras--with candles-- at 8 a.m.?) The sound system is great, too--when a person speaks, it makes him/her sound like The Voice of God. I can imagine what the place is like when it's hopping with clubbers. I keep thinking of the Barry Manilow song--not because they're using it as a theme, but because the place just has that disco era vibe. But it's comfy to me. Guess it's just the old New York club person in me...

As to the shindig itself: the Summitt most definitely tried to help business/marketing/p.r. find a better way to interface with those of us who blog (hence known as The Rabble.) The Rabble is unweildly, unpredictable, capable of hurting Business--or so it seems from the tone of some of the businesspeople who were speaking (more on that in a bit.)

I ended up sitting next to Jory DesJardins and Elisa Camahort (two of the founders of BlogHer) and behind Mary. It was a prime seat, that's for sure, and nice to sit next to people I know. That's one crummy thing about conferences--at this point, I don't know too many people, so it's not like "old home day" for me...it can be excruciating at times.

Seth Godin opened the keynote. If you've never seen Seth, he's a short, wiry guy with a bald head. Very amusing on top of being brilliant! Yet his keynote tuned into a demo of his new product Squidoo...Susan Mernit blogged about how it felt like a giant commercial and Seth responded why it was like thathere. It felt, though, kind of like sitting in the room with one of your friends who just got the Gospel of Mary Kay. If marketers want to know how to use customer evangelists, all they really need to do is consult the Mary Kay Corporation.

In retrospect, I think it was a physical demonstration of what marketers want to do with blogging--get familiar, entertain us or earnestly give us good information, and then tell us about something they've got that we think might be useful. That's alot like old-fashioned, one-to-one salesmanship--something we used to do alot of in retail, until the marketers decided we needed canned scripts about products to sell them more effectively (ask me about my days at Frederick's of Hollywood and how retail stopped being fun for me.)

BlogOn's recap of the morning, with links, is here.

But I was actually there on a mission....and one of the best reasons for sitting with Jory and Elisa and Mary (other than the fact that I really like them) is that Jeff Jarvis was two rows in front of us. And when the session break came, I turned to Elisa and Jory and said "I'm going to go over and talk to Jarvis, watch this."

And I did..."Hi Jeff, I'm Tish G"....Jeff laughed and we shook hands and said how much fun it is getting into the back-and-forth that happens in blogging. Jeff's really a great guy. Very open and warm and, IMO, what he's trying to do with Buzzmachine is indeed get some of us Rabble involved in the conversations that he's always into at conferences (the conferences are often Rabble-free zones--although there's lots of talk about Us.) Jeff suggested I get into consulting (and had a quick and dirty strategy for doing that) and when I told him my true interest in blogging had to do with how our identities are being shaped by the Internet and things like social software, he told me he would be doing a sermon along those lines at his congregational church on Sunday.

And then I realized why I like him...he reminds me a heck of alot of the guys I used to work with in Princeton. He's got that same Presbyterian air, but something earnest that comes from being mainline protestant in a time of social change, when being mainline wasn't a bad thing.

I like Jeff...I don't think he dislikes women, as some people tend to think. But he is rough and tumble and it seems to me that he does expect women to go toe to toe and prove themselves. And I know from email that he probably doesn't mind when I engage in a blog-version of a Bronx Cheer from time to time.

There were lots of demos between the talking-heads...

The panel Jarvis was on, chaired by Susan, also had Bill Schreiner of AOL and Peter Friedman, Chairman & CEO of Liveworld, Inc. The funniest thing to come out of this panel were the comments that bounced between Jarvis and Schreiner who couldn't understand why young people where so into IM'ing and email and all that. And Elisa and I turned to each other and went "well, duh! didn't they ever pass notes in school? don't they know that girls always check out a guy's rep before going out with him?"

From my position in the Peanut Gallery of Life, there seems to be some things that are wildly self-evident if you're not sitting somewhere where you never interact with The Rabble. Kids pass notes. They like to talk. In talking to one another, they are practicing social skills. the kids I had to endure on the train back were evidence of that. Kids are alot like chimps--they chatter alot and bounce off the walls. But it's practice for adulthood!

Shreiner, Jarvis and Friedman also puzzeled over if whether young people will continue to use mediums of communication they are now "really into"--from IM and email and sites like MySpace and LiveJournal and Xanga--when they are a bunch of paunchy (or scrawny) greyheads. Once again, none of these guys probably ever passed notes. If they did, do they do that now??? Probably not. The things we do as teens that are ways of practicing adult communication patters are unnecessary in adulthood. Sure, as adults we will still use IM and email and blogs as various ways to communicate across the great digial landscape, but the frequency of use and the reasons for use might be different.

These guys also don't seem to realize that youth is not a static stage of life. There seemed to be this belief that who one is as a young person is who they will *always* be. I have two words for them: Jerry Rubin. If you don't remember him, he was a really huge Hippie leader--along with Abby Hoffman, kind of the poster boy of the Hippie generation. But, he turned into a businessman--much to everyone's chagrin.

If it happend to Rubin, it'll probably happen to everybody at some point. Future generations are not exempt from the experience of life any more than us Old Folks.

I shook my head and we went to lunch...