When I heard that AOL had re-created its AOLNews site to be a bit more "bloggy," I began to be very afraid.

And there was reason to be afraid. 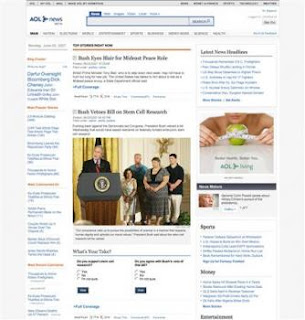 Yes, it's quite blog-like. Very much like a blog that someone just started and is throwing the kitchen-sink into it to see what works. Run it up the flagpole and see who salutes. Throw it all against the wall-polls, comments, pundits, a paltry newsblogroll--and see if any of it sticks...

And, by mid-day, the more serious headline shown in the photo (from Reuters--probably of AOL's "news" page rather than "home" page) was replaced by one of Paris Hilton leaving jail....

Hmmm...not really surprising when we consider that the guy hired to do this re-design, Lewis D'Vorkin, has had super-success with TMZ (which is a joint-venture between AOL and TimeWarner)

If anybody knows how to catch those gossip-mongering eyeballs, it's Lewis!

So, I guess the big brains at AOL believe we all want to see our news presented in gossp-blog format. And we want copious polls and lots and lots of places to leave comments for....

Well, for whom? Mo Rocca? Or Dinesh D'Souza? On D'Souza's post on Paris Hilton (did we need another one???) there are some comments from various people with first names, only one linking back to the old AOLNews main page, which is now screaming about the murder-suicide of wrestler Chris Benoit and family....

Oh, and the comments to D'Souza's story is obviously meant to direct us into a conversation with other community members and not directly with D'Souza.

After all, do these perfect pundits really have the time for the people? I tend to think many are more like LA Time's Joe Stein on the matter of columnist-to-people communication.

All of this uber-bloggyness at AOLNews seems so bloody banal--a stilted attempt to make people feel like they're communicating with other people, when, at the moment, all it feels like is yelling down a well...

Yelling down a well about more bloody-ridiculous-awful celebrity gossip...

Or maybe dictating what they think is news. As for the rest of us--well--I guess news is relative.....