Wired used to be cool--at one time it interviewed guys like Linus Torvalds. But today, it kinda sunk to a new level of link-baiting with Paul Boutin's declaration that blogging is over and how everyone who's anybody will be sharing bits and pieces of oneself all over a variety of social networking sites....(yes, I'm going for the link-bait...)

Paul goes on a bit about how new voices just can't get heard over the din of professional blogs: When blogging was young, enthusiasts rode high, with posts quickly skyrocketing to the top of Google's search results for any given topic, fueled by generous links from fellow bloggers. In 2002, a search for "Mark" ranked Web developer Mark Pilgrim above author Mark Twain. That phenomenon was part of what made blogging so exciting. No more. Today, a search for, say, Barack Obama's latest speech will deliver a Wikipedia page, a Fox News article, and a few entries from professionally run sites like Politico.com. The odds of your clever entry appearing high on the list? Basically zero.

Uh, no. This never was the case, really, with the possible exception of guys like Mark Pilgrim and others in the tech world, which has always been its own Private Idaho of sorts. What Paul doesn't seem to remember is how Google used to *not* pick up blog posts from small bloggers, usually because the SEO was pretty awful. A lot of that changed with Google's acquisition of Blogger and Wordpress's crackin' good SEO. Both have helped to bring more blogs into search.

Including this humble little blog....

On the whole notion of blog traffic, I'd like to point to Darren Rowse's wonderful graph showing how a group of bloggers he surveyed get most of their traffic directly from Google vs. from other sources (see this post as well): 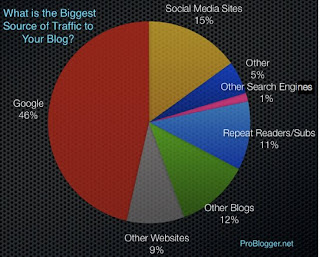 Even though this was a self-submitted group, you can bet that many of these bloggers aren't "A-listers" in the traditional sense of the word. Many may indeed be niche bloggers, who enjoy very good traffic and feedback from a particular group of readers. The idea of who is or isn't an A-lister has changed and is relative to who among the myriad of niche bloggers you're speaking to on any given day. There are A-listers with huge traffic that traditional Silicon Valley "A-listers" have never heard of, and have Google page ranks lower than 3. I've met some of them....

Overall, more people are reading more blogs these days than they were years ago--because more blogs come up in search, and because many people don't really recognize that they're reading a blog. Some think blogs are "websites." Further, if you cultivate good keywords and solid posts in a particular niche, you will come up in search more often....AND you will knock out the transparently bad marketing blogs and splogs....

In order to continue his point, Boutin goes on to invoke the old incivility bugaboo (reminding me a bit here or Andrew Keen): Pour your heart out in a post, and some anonymous troll named r0rschach or foohack is sure to scribble beneath it, "Lame. Why don't you just suck McCain's ass." But think of the irony here: a Valleywag writer declares that most blogs get only uncivil comments, when Valleywag itself is known for erroneous and somewhat uncivil commentary on the tech industry--kind of like Keen was accused of "trolling" with his book "The Cult of the Amateur."

So, pot, meet kettle...if one is going to decry incivility, one must take responsibility for one's own contributions....

Which makes me think: the whole civility discussion is now fraught with such irony that it risks becoming a non-conversation--or a bit on the Daily Show.....

The other two statements that have little bearing on the majority of bloggers have to do with Calacanis and Scoble. As many of you may already know, Jason Calacanis stopped blogging awhile back and has moved everything to a subscriber-only email list. Which, when it happened, was decried as a rather retro and non-social move. If we follow Boutin's logic, it's now hip to be retro--cooler to have an email list for friends only than it is to publish for everyone. So only your friends can read your thoughts and you don't have to deal with those awful "incivil" people (or worry about Valleywag misquoting you...)

When invoking Scoble, Boutin admonishes us to "get a clue" and just microblog, post videos, etc. What Boutin doesn't acknowledge about videos is that many of the comments on videos, esp. those on YouTube, are rife with troll-like comments, not to mention that most comments are never responded to by the folks who post the videos (I'm not sure what Scoble does. I don't follow his video work. Too time consuming. I have friends and a life...) So videos are in many ways and for many people just another form of broadcasting and the commentary is...well....(more on video and communities in another post...)

As for microblogging and using Facebook--those are great for keeping up with people you already know, and maybe for finding another "fan" or two here and there, but many folks do not use those tools to search for information. Occasionally on Facebook, if our friends are discovering cool things and posting about it, we might check out whatever. What friends discover, though, are often other pages within Facebook, so we never really leave Facebook.

What fun is that??

And microblogging, for the most part, is still a niche activity. Most people who don't live in the Silicon Valley, and have real jobs, and perhaps real-world, face to face relationships, don't use microblogging all that much. Of those who do, they're not necessarily going to use Twitter or other microblogging platforms to search for information. Twitter's there for lots of reasons, but unlike Scoble, who has thousands of "fans" who hand on his every tweet, and is essentially a disseminator of a particular kind of gossip and information, most of us are just regular folks who are exchanging personal info and a few bon mots with friends while we get on with the business of our workdays...

We're hardly using Twitter to search for information or to read the news That's why lots of us use Google (and some use Digg, Reddit, or other "social news" sites--something Boutin doesn't mention at all...but we might not use "social news" to be social either...many just read and never register, keep a profile, or comment.)

So, what then for blogs? Is the blogosphere, as Boutin contends, now so fraught with bad marketing blogs and high-powered magazine style blogs and so rife with incivility that those of us who aren't Big Guys should just give it up? I'm not so sure someone who writes for Valleywag--where a writer has to churn out a huge amount of daily posts to earn a living and in its own way courts trolling--quite understands how the folks beyond the Silicon Valley, beyond the friends of Calacanis or the worshippers of Scoble, beyond the realm of blogging-for-a-living use the medium, how even a humble blog can end up in search, and how even a marketing blog can help a company connect with customers who don't use Facebook, Twitter and Flickr. Blogs, for tech insiders, may not be some kind of cutting edge social tool that they were back in 2002, but they still have the ability to reach many people--people who might never find their way to Facebook, who have little reason for LinkedIn, who have no time for Twitter, and value their privacy too much to post on Flickr and YouTube.

And, if you think about it, if blogging's dead, isn't Boutin writing the obituary for his own blogging career?

It seems to me that microblogging, social bookmarking, Google Reader shares, etc. has absorbed a lot of the energy that used to go into short posts where people linked to other people and included a short description (John Dvorak wrote an article about reading blogs that used that format as an example). Blogging, despite its roots as "web logging" is currently favoring longer form writing, IMHO, as well as better integration of multiple media. You could argue that it is evolving from its original raison d'etre, but sometimes that happens with tools.

At any rate, I don't see myself taking Boutin's advice.

Hi Mark, good point about how folks used to blog--which looks an awful lot like what's on Twitter. So, we have different apps for different needs. If anything, all the new stuff makes the old stuff more fun!

Concisely written and comprehensive, put that in a tweet and smoke it! From one end of the court to the other and slam dunked it!

Funny, I'm sure synchronous voice communication is dead, too, but that's exactly how you told me about this post on this "dead" blogging medium.

Our industry is FULL of premature obituaries. How many times have you heard "Apple is dead"?

We need to get Jay Rosen to unpack the whole "X is dead" meme and tell us A) what it really means and B) what people are trying to tell us about themselves when they say it.

An excellent post and rebutal to Boutin's link-baiting piece, which left me just thinking he was talking about something totally removed from my blogging. Also, an interesting point about blog traffic, as virtually all of mine comes via google searches.

I do find myself reading blogs more and more. Took me a while to figure out the ways for me to identify good blogs and then have them organized and accessible so I could read them.

My daughter talked me into signing up for Twitter as she lives in another city and works irregular hours. For that purpose, it's been useful. But i don't understand folks who are posting every 45 minutes...nobody's life is THAT interesting, is it?

Also, how could microblogging ever take the place of thought-out posts (like yours) that set out to make a case and then make it?