I am a firm believer that when the local media is held hostage by media conglomerates--whether public or privately owned-- that the people have to start using new media to be heard. Nowhere is this more evident in Western Massachusetts, where there is one paper for Springfield, one paper for Northampton (held hostage behind a pay wall), an "alternative" press that's owned by Tribune, and most of the radio's been parsed out to Clear Channel. Between the press and radio, we get a healthy dose of the most moderated and bland media mush you could possibly ask for. But I had no idea what my fellow citizens had been up to... 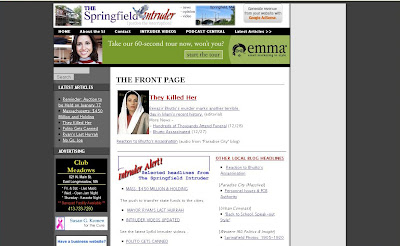 Little did I know that Bill Dusty--a guy who once called me a "weenie" on the Masslive boadrs ;-)--started something called The Springfield Intruder (gotta love that name!) I found the Intrude when Dusty linked to me in a blogger vs. journalist piece he wrote earlier this month.

And yes, that's a great way to get another blogger's attention!

The Intruder demonstrates how one guy with a big mouth can start a fairly decently looking citizen journalism site....I wish Bill great luck with this venture and hope he can keep growing it in '08. 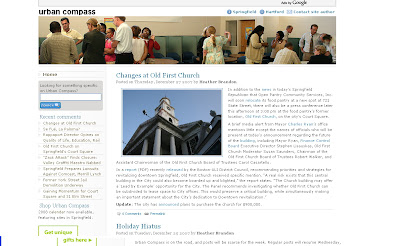 Meanwhile, my friend Heather Brandon, moved out to Hartford and took her popular citizen journalism blog Urban Compass out from under the auspices of *any* mass media venture and into its own. Heather splits her writing between Springfield (where she still feels a connection) and Hartford now, but I think that being out from under the msm has given her much more freedom to create and maintain a site that explores the issues of Springfield and Hartford in a way that puts Them to shame. 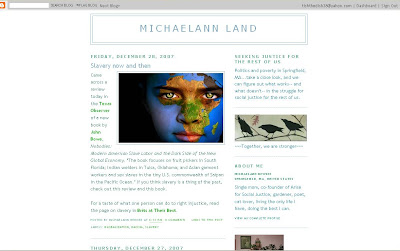 Michaelann's blog entries are short and to the point, sometimes personal, usually with links to more info. Her blogging's important for keeping an eye on the homeless situation in Springfield--which got a bit bleaker with the close of the Food Pantry that was maintained in the Old First Church (which is also closing)

There's something of an irony in the close of Old First Church. It's the folks who founded churches like OFC that became the folks who, for the most part, head social justice initiatives. But, somewhere along the line, perhaps with the decline of mainline protestantism, the same institutions that nurtured social justice initiatives no longer have enough congregants to keep going... 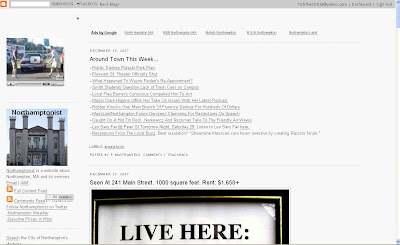 What impresses me the most about the Northamptonist is how Paolo wrote a very balanced post on the extrememly contentious issues of development in Northampton, which gave equal time to Adam Cohen, noted for NoPornNorthampton...Paolo also did not alter any comments to the post.

A couple of things about the Northamptonist: it would be nice to know more about Paolo, as in he *could* post a profile of himself somewhere. Not everyone is familiar with the "cast of characters" in Northampton, and since the blog is not anonymous anyway, why withhold that info? The archives could also be re-organized by date rather than topic, but that's an editorial decision... 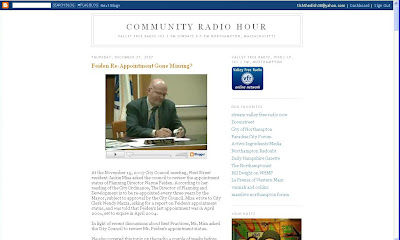 where you'll also find mp3 files of past shows.

CRH is hosted on our area's answer to ClearChannel, Valley Free Radio WXOJ-LP 103.3FM. It's an interesting station, one much needed--although I the one show I heard one night coming back from Boston didn't impress me all that much, there's most definitley some fabulous alternatives to the John Tesch (??!?) and Leeza Gibbons hosted messes on ClearChannel...

Now, whether these citizen journalism sites are to the right (like Dusty's) or the left (like Mastrangelo's) doesn't matter to me--it's the fact that local citizens are raising issues and starting conversations outside of and independent of the auspices of local media. Local mainstream media should not in any way be the "support mechanism" or "foundation" for citizen journalism That just doesn't make sense--and, frankly, can easily make citizen journalism the low-paid toadie of a poorly-produced mainstream journalism. We need independent voices, and I'm glad to see that these folks are going the independent route.

All the best to them and their endeavors in '08!
Posted by Tish Grier at Saturday, December 29, 2007

Thanks for the mention! I've written since I was a kid, but writing a blog is something else again-- I've been at it for nine months and think I've just scratched the surface of what can be done. I too am pleased to see some of the intelligent, well-written blogs from WMA.

Hi Michaelann! I always try to tell people that blogging's different from regular writing. A lot like journalling, but you have to watch spelling ;-)

Best to you in the New Year!

Well, I settled back into the blogosphere after some New Year's weekend fun and what did I find...

I guess I had that coming ;-) Thanks for the mention, Tish.

I'm a Bostonian who has spent a good deal of time in Northampton, etc. Interesting links.

Thanks for the kind mention, Tish, and it has been really interesting and good for me to go independent. I really appreciate you giving me props for it. Happy new year!