UPDATE 6/17/08: Something has gone totally wrong with the Courant's boards. Mayor Eddie Perez called for the Courant to ban "what he calls 'racist hate speech' in the discussion forums" Governments shouldn't intervene in the business of the newspaper--and the newspaper should sufficiently police its own forums. In this case, the relationship with Topix may result in dire consequences for the Courant.

In her Sunday column, Hartford Courant reader representative Karen Hunter discussed (or is it kvetched about?) the how the Courant's Reader Forums are a terribly nasty place:

I have to admit I don't wander light-heartedly through The Courant's online forums. When a reader asks, I will take a look for an exceptionally rough exchange. Sometimes the callers are the targets of the slings. Many times I hear from readers who have no connection to a story but are repulsed that The Courant would host such uncivil discourse

The Courant's Forum "experiment" (as Hunter referred to it) is only about 8 months old. Not long in the life of a newspaper forum--so I was particularly bothered by Hunter's words, not to mention what appears to be the small fact that she really doesn't spend time there other than to follow up on someone's email to her about the forums...

How odd--going to your own newspaper's Forums only because someone else is requesting you to do so! This most certainly will lead to an inability to fully comprehend the community that's developed on those forums.

Wanting to know more about how "incivility" on a eight-month old forum could make a paper's reader representative tremble in fear and loathing, I started to poke around more on the H.C. site, just to see for myself what the deal was (as I am rather fearless of online forums--remembering the rule of "lurk before posting.") I found some things that, on the one hand, could be contributing to the incivility, and, on another, be nothing more than a viewpoint distortion based on the columnist's squeamishness (or is it dashed hopes?) about online discourse.

First, the Forums are pretty difficult to find from the Hartford Courant's main page. Looking around, I found nowhere to click into them. And no indication that they're hosted on Topix.net either. Maybe the Courant announced this little feature when they first launched the forums, but if I was just moving to Hartford and wanted this sort of thing from the H.C., I'd have no idea that the Forums even existed.

Which raises the question: why might the Hartford Courant's forums be hosted on Topix.net anyway? Well, money *could* be a consideration. Sometimes it's difficult to cobble a forum feature onto the back end of another platform--costly, and like putting an Continental kit on the back of a '56 Cadillac.

Topix might have given the H.C. a good deal for hosting their forums--maybe some administrative guidance, too. Hunter writes about assoc. online editor Paul Stern's interactions with Topix administrators: "Almost on a daily basis I ask the Topix administrators to permanently ban posters who are particularly offensive. The Topix folks always oblige, though the offending users often return from a different computer and we have to ban them again.

Well, the Topix folks *should* oblige. The H.C. Forum IS hosted on their site. (still, this was a really crummy, half-measure for having forums--and could indirectly contribute to the incivility--as there are no rules handed down from the H.C. directly to their commenters. This is often the case with newspaper forums. And, if you don't give people rules--as well as good moderation--you're setting yourself up for failure.)

Now, because I was so interested in the H.C.'s online conversation, I wondered how the heck I could get from Hunter's article to the entire Forum. To get there, I had to first go to the reader comments--which I could reach by clicking on the "Read all 106 Comments" line at in the comments box at the bottom of the post. 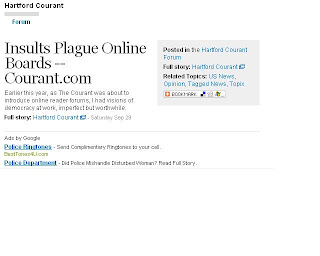 Or, I could click where it says "reader feedback" in the Article Tools box on the upper right hand side of the article. To get to the list of all the "reader comments" I could click on either the word "Forum" in the upper left corner or, in the little gray box on the right, click "Posted in the Hartford Courant Forum" (you can see those features in the pic.)

So, once I figured out how to negotiate the Courant's Forum space, I ventured in to see what was going on....and quite frankly, from the perspective of someone who's been doing the whole online communication thing for close to ten years now, the Courant's Forums are doing ok. They are NOT as "incivil" as Karen Hunter believes them to be. Here's the Forum Main Page--you'll notice that there are one-hundred (100?!?) active topics just on this page alone--and most receiving comments within the past two hours! And take a look at the numbers of comments 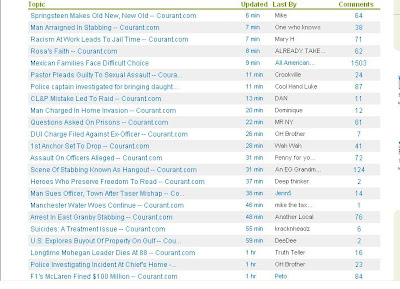 What they've got over on the Hartford Courant's Forums is a a lively community--yes, there are folks who are really off-base, some who are just hot-headded, and others who act as good community police by calling out the offenders.

More importantly, there's lots of really good online conversation. It's not all horrors...

Stern isn't alone--maybe he just hasn't figured out that he's got allies in there. Although when he says ""I kill a dozen or so bad posts on a typical day - sometimes many more..." you'd *think* he was totally alone. I wonder if he really even knows there are folks out there helping him. And, that when conversation gets really heated on particular issues (racism appears to be a very contentious topic in the region the H.C. covers) it's the moderator's job to delete stuff!

Yet when a Forum has so many stories with active comments, the numbers of comments to be deleted will, more than likely, be high. That's just a numbers game.

So, how might the Courant deal with the nasty-commenter numbers game?:

More monitoring would be ideal, but the reality is the volume of comments and staffing priorities prevent that.

The solution: Stern has campaigned for an end to anonymous postings.

Well...there goes the neighborhood....now all the "nice" people will take over...

(please take a look at the comments to Hunter's post to read what the people not only know but think of anonymous posting. Pretty smart stuff overall. Dare I say smarter than the Courant Staff???)

Hunter then goes on to quote a true authority on the goings on of online life and anonymity, Andrew Keen:

think the most corrosive thing of today's Internet is anonymity," Keen, author of "The Cult of the Amateur: How Today's Internet Is Killing Our Culture," told NewsHour Senior Correspondent Jeffrey Brown.

"That's what's creating such an uncivil world. It's a pre-social contract place. It's a state of nature. We're not behaving ourselves properly on it, very often because we don't reveal who we are. Much of the most uncivil conversation, much of the unpleasantness of the Internet is carried out by people who won't reveal who they are."

Now, I have nothing against Keen, and I think he's often a good antidote to a lot of the Silicon Valley hype, but he's way off on this one. And is, overall, playing into the ignorance and fear of online communities that so many online community newbies (people and news orgs alike) have about them.

Keen never refers to the importance of anonymity in places where people are oppressed or where they fear retribution. As I found from reading the H.C. Forums, there are people who fear reprisals from law enforcement(probably justly)--and, I'm sure, some who might fear reprisals from employers if they posted under their real names.

Now, if the Courant really wants a solution, they should look at what their readers are saying in the comments and take both Hunter and Stern's opinions only as part of the solution. From the comments, it appears that many readers wouldn't mind a registration mechanism that allowed also for screen names--as long as they were assured their information might never be turned over to outside and third parties. Still, I think the better antidote would be a better understanding of what goes on in online communities as well as more moderation of the boards. These are super-active boards, and one or two people just isn't enough. Overwork could lead someone like Stern to figure that if they posted under their real names, everything would be hunky-dory.

No--that would just make the H.C.'s Forums into a happy-happy-joy-joy echo chamber. Sanitized For Your Protection.

Right now they've got evolving conversation and community--just like in a diner or in a barroom (well, in some comments sections, more like a barroom at 2a.m...)

Because the staff is overworked and (probably) underpaid doesn't merit censoring the community.

Perhaps Hunter should put down the Keen and read a bit of Shirky about online communities and Weinberger on the importance of anonymity. Then try going into the boards as a lurker, just listening to understand what people are talking about, not looking for things to react to.

Rich Skrenta -- former top dog at Topix -- once quipped that "Anonymity is the root of all evil on the Internet."

I'm not convinced of this. I suspect that I do, however, have a much lower tolerance than you do for online forums.

If I had the answer for "foster a huge community of people who were generally civil to each other," I could make a mint.

Hi Mike! I had no idea that Skrenta once said that--then again, the times I've heard him speak, he really wasn't all that happy with online communities.

Have you ever looked at the info you have fill out at Topix to post? It seems somewhat like they want to develop some social networking in that--but IMO, we need anonymity around news commentary for lots of reasons. News ranking sites like NewsTrust have less of a need for it.

The only way and places I've seen that end up with fairly good sized communities and civil discourse (for the most part) are gated communities that require not just registration but approval to get into them. This is fine, I think, for certain niche topics like film reviews and the like, but I think for news dicusssions (esp. on hot button topics) the discussions have to be out in the open and we just have to develop thick skins to deal with the contentiousness. When things get real bad, when the attacks are nonsense and/or ad hominem, then by all means get rid of them. But if there's a grain of something good, then perhaps "disemvowelling" them can help.

Problem is, nobody wants to pay moderators. Bottom line.