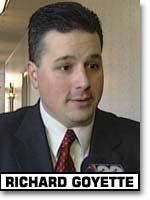 So, Chicopee's Fearless Mayor, Richard Goyette's office was searched yesterday in conjunction with his arrest on corruption charges. 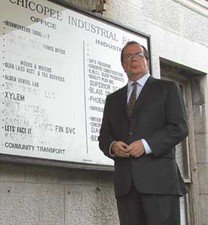 All this comes one week before the election--which means the residents of this little city have a choice between a Crook and Some Other Guy. But how much do we know about Mike Bissonette?

Apparenly, anonymous mud slinging documents, with mud directed at both candidates, started showing up before Goyette's arrest. So far, though, the mud has stuck to only one.

What if it stuck to the other one too?

Small-town politics troubles me. The whole thing with Goyette--demanding money from tow-truck operators in exchange for city contracts--is something that, anecdotally anyway, always happens in the hurly-burly of Big City politics. It's business as usual in some places. The fact that it's blown up in Mayor McCheese's face here makes me think that some small-towns are a little less corruption-riddled.

Or did he just cross the wrong Wise Guys?

So, where does all this leave voters? We have the choice between a crook and someone who might not represent what we feel is right for our city.

It makes me think, too, about how so many of the Capitol Hill issues don't really mean a Hill of Beans out here. The Republican Pary's stand on abortion and The War really don't cut it against issues like environmental clean up and job creation. Out here in a working-class city of roughly 56,000, the issues are jobs, dealing with a growing elderly population, and environmental clean-up (the result of years of neglect and greed). We might not like abortion or The War, but what a local politician thinks about those particular issues is, well, a personal matter out here. Voters can overlook that stuff if the guy is willing to address the larger issues--like whether or not the local farmer's market can accept food stamps.

It's a shame that Goyette did what he did for what amounts to chump change. He managed to get a program going that has helped revitalize an abandoned mall--and while it means we have a new Payless Shoe Source, Wal-Mart, Home Depot, and 99 Restaurant--blights and some labor law violators, as well as bad food purveyors--it also means jobs and services of *some* kind. There's also been two new high schools and now a possible new senior center... all while every day we watch fresh groups of reservists ship out from Westover AFB to fight an immoral war.

What do we do? How do we choose the person who's right for our city? Do we turn our head to chump change extortion--shrug it off and say "well, he's brought alot of development here." Or do we keep one set of morals and issues for the Big Guys in Washington, another set for the Little Local Guys, and vote for who we figure isn't taking a kick-back?

In small-town politics, who do we choose when corruption jeopardizes our Freedom of Choice?

LOL! You crack me up with your liberal views. We are fighting terrorism, yet, in your world, the 4,000 citizens in NYC did not matter. We want more in our paychecks, not you liberals TAKING more so these poor drug dealers can go to the farmers market and have me pay.

Corruption and bad govt work both ways. Try to see that through your rosey colored liberal glasses.

Take a walk down to the Stop-n-Shop on Memorial Drive one day and see exactly who's using EBT cards. You'll be surprised to discover that alot of them have husbands who are Reservists or whose husbands recently lost their jobs thru some kind of corporate downsizing.

The only Terrorists we have to worry about out here are folks like the Ardolinos, the Asselins and Gerry Philips and his buddies from MCDI.

Those people deserve EBT. How about the PR woman who bought 4 lobsters with an EBT, then walking over and taking out $20's to buy lottery and butts?

And, there are no other terrorists? How about the ones that attacked us on our soil? OH, those do not count in your world. Who cares about Americans being killed, right? Bet you are one of those tree huggers that says forget about 9/11, that was a long time ago.