Update 6/1/09 A new study from Pace University and the Participatory Marketing Project shows that only 22 percent of Gen Y (The Millenials) are using Twitter The blurb on the study goes on to say that Gen Y has to be convinced of the value of Twitter Um, if you have to convince them so hard, then maybe it's a medium that they don't need right now--they may need it as they get older and can't text from their workplace. Sheesh! Apps, though, are hot for everyone Thanx C-Net for the link end

In a post today on the Comscore blog, blogger Sarah Radwanik notes how Comscore has observed a huge spike in Twitter traffic over the past months including an increase in U.S. traffic, with users reaching 4 million...

Comscore hasn't released their official analysis of the Twitter numbers, but Radwanik points to a post by Reuters reporter Alexei Oreskovic who recently posted about the demographics of Twitter users. Radwanik extrapolated on Oreskovic's bare-bones figures and found that "18-24 year olds, the traditional social media early adopters, are actually 12 percent less likely than average to visit Twitter (Index of 88). It is the 25-54 year old crowd that is actually driving this trend. More specifically, 45-54 year olds are 36 percent more likely than average to visit Twitter, making them the highest indexing age group, followed by 25-34 year olds, who are 30 percent more likely." Check out the following two graphs showing the rise in traffic and rise in age demographic usage: 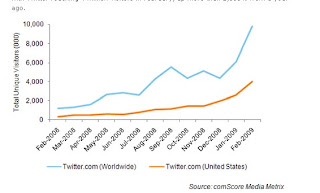 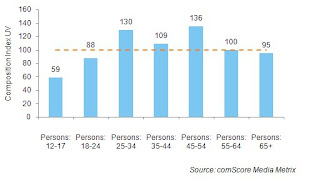 So, when Joe Blundo of The Columbus Dispatch asked his teen-aged daughter about Twitter and she told him he wouldn't like it, he should have gone to the more tech savvy folks he (maybe doesn't) know and ask one of them about Twitter.
He would have gotten a far better answer about it, and perhaps wouldn't be still scratching his head over it.

Ian Paul at PC World suggests that "[T]his means the concept of the technologically inclined "early adopter" as a young, predominately male demographic may have to be revisited."

MAY HAVE TO BE REVISITED!?!? My god! I've been screaming about this one for some time now. This just goes to show me so many in mainstream media are so in love with the hype around the youth demographic that they have failed to see what is happening right under their noses among people their own age.

What might account for the rise of Twitter use among a not-so-youthful demographic? As a constant and continual observer of patters in online use among the marketing and journalism communities I've seen how the message of Twitter's effectiveness has not gone unheeded. And while there are many great, fun, and not overbearing uses of Twitter in marketing like @DaveTheShoeGuy, there are also a cadre of dorky, dimwitted, and egotistical multi-level-marketers and other assorted snake-oil salespeople spamming us daily with their "follows." Among journalists--many of them middle-aged--there is a high, and highly effective, use of Twitter. The journalists who use it are so good at it, I had to write a post about it.

My observations have lead me to conclude that a good understanding of how to use Twitter comes from the adept use of both online and face to face communication. Far from being the closeted geeks of old, the middle-aged Early Adopter crowd are the people who have those skills down pat. Is it any wonder that they're doing so well on Twitter (when you tease out the dorks, that is.)? Perhaps only to those dazzled by youth--but not to the truly social media savvy of us out there.
Posted by Tish Grier at Wednesday, April 08, 2009

I just always assumed I was an outlier as a middle aged woman early adopter - I've been pretty ahead of the curve in most techie stuff since the mid-80s.

I wonder if younger users don't use Twitter because they're already pretty adept at phone texting and other IM uses that they don't see the point, where older users probably spend more time on the internet because of their jobs?

You've got a good point about teens being more adept at text and other forms of IM vs. Twitter. That could very well be the case, as I see more teens/college kids with standard cell phones vs iPhones, which would give them access to Twitter. Twitter's pretty bad on most cell phones, and most text conversations are meant to be private, vs. Twitter which is far more public....

I think the various forms of social media/networking are bringing all of us outliers together and helping us to be seen more. Which, IMO, is a great thing. :)

Your blog contain a many useful information. I enjoyed the article. thanks!

I think teens are more on Facebook nowadays, although some of them are on twitter too because of the celebrities they follow. Twitter or FB, I also think parents should be aware of their teen's activities online since it's where most negative stuffs are learned from.